For me Flores Island is the most beautiful place that I have ever visited so far in my life. I really feel lucky that I had a chance to visit Flores Island while doing the research activities.

Actually, I have a family who is from Ruteng area, she often promote her hometown and asked me to visit Ruteng. At that time I didn`t manage to visit Ruteng, and finally I visited Flores Island on this trip and I was so amazed by the nature scenery and its traditional architecture. Through this article, I want to share my some stories from the village and share the pictures of Flores`s scenery.

This is the morning view of the Labuan Bajo area.It is view from a breakfast area in Labuan Bajo. The sky and the sea are so blue. I really love it.

And it is a sunset view from the boat. It`s a boat trip from sub-district Komodo to Labuan Bajo Port. It`s crazy beautiful, the scenery.

There are 70 villages in Ruteng forest and 22 villages in Todo Forest. The only 3 traditional villages are named Ruteng Pu`u, Todo and Wae Rebo village.

The manggarai tribe have a belief to the nature and environment. It is called Mori Keraeng (the Universe is the creation of Him). The earth, sky, and forest have specific meaning for the manggarai tribe.

Earth (mother that produces food) sacred and need to be threat well by holding worship and ceremony.

Sky (father who gives rain and fertility of soil)

Forest (Sacred daughter/anak rona) they have a ceremony called Roko Molas Poco which is a traditional ceremony to propose big tree to be the main pillar of the traditional house. 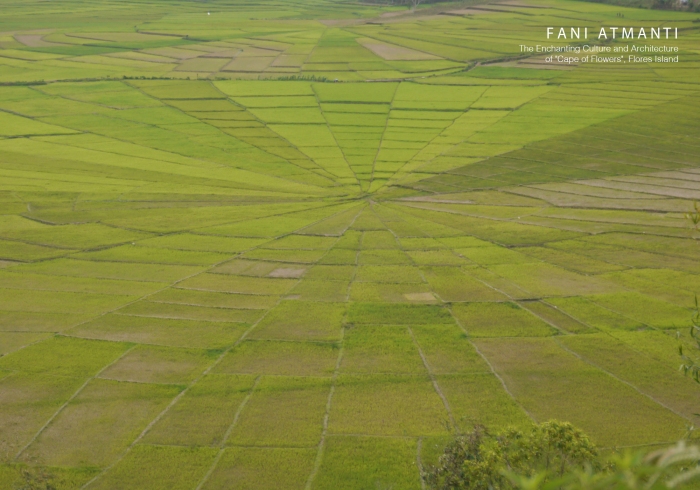 There is also land division of the traditional land called Cengit Pong, Longko and Rami.

Sacred forest /Cengit pong is a forest which is not used in addition to traditional ceremony. It is a tradition of forest protection with public participation.

Secondary Forest (Rami) is an agricultural reserve for the purpose of shifting cultivation.

My first trip was started by sailing from Labuan Bajo to a Nomad village named Seraya Marannu Village. It takes 2 hours round trip by small boat from Labuan Bajo Port. The Bugis, Layar, Bajo, and Makassar people live in that village. This Serayu Marannu village is located in sub-district Komodo and West Manggarai Regency. 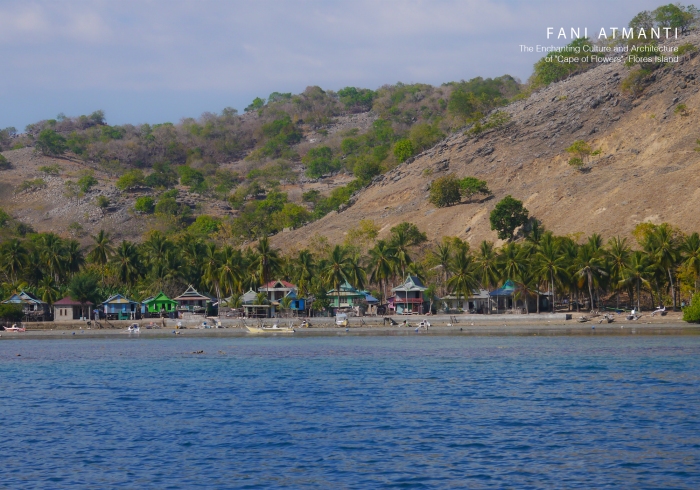 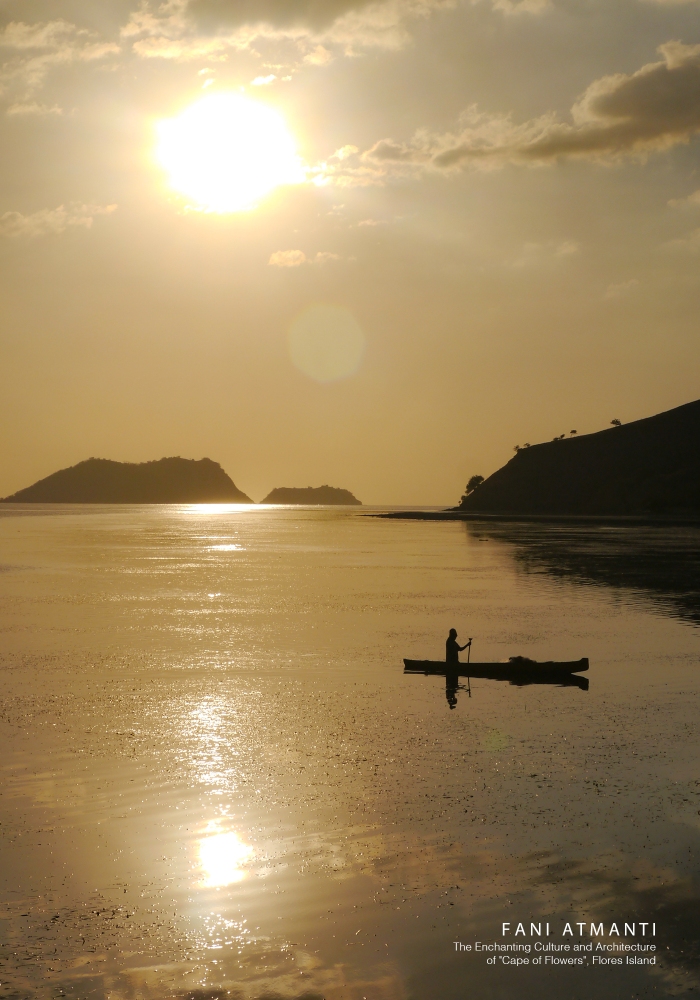 Todo is located in Manggarai Regency, East Nusa Tenggara. In the ancient times, there were 9 traditional house but some of the houses were destroyed by the typhoon. The 9 traditional houses called : Niang Dopo, Niang Lodok, Niang Mongko, Niang Rato, Niang Mbowang (the main house), Niang Wawang, Niang Supe, Niang Wesa, and Niang Kanang.

Now there are only 4 traditional houses that were rebuilt with the support from Indonesian government. On 2013, there are new rules to enter the village area. The visitors have to wear traditional sarong and pay some amount of money for the entrance fee.

I learn new words from the villagers such as ala caci for entrance and exit, lutur for front room which is used for meeting room, loang for family room which is considered as private space, sapo for the kitchen.

Here are some photos of the Todo Village : 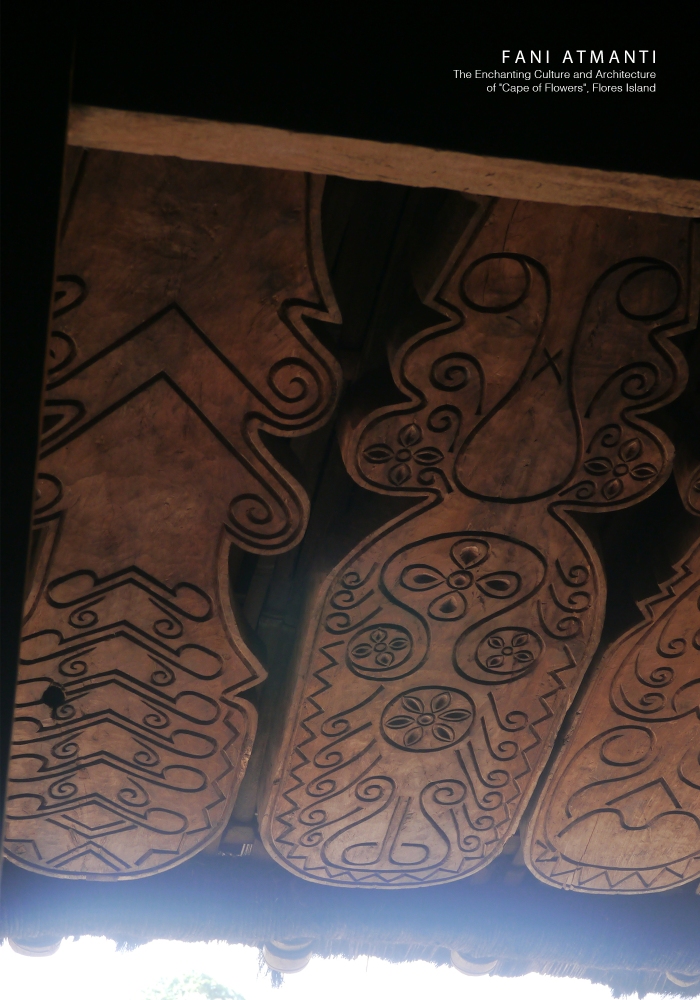 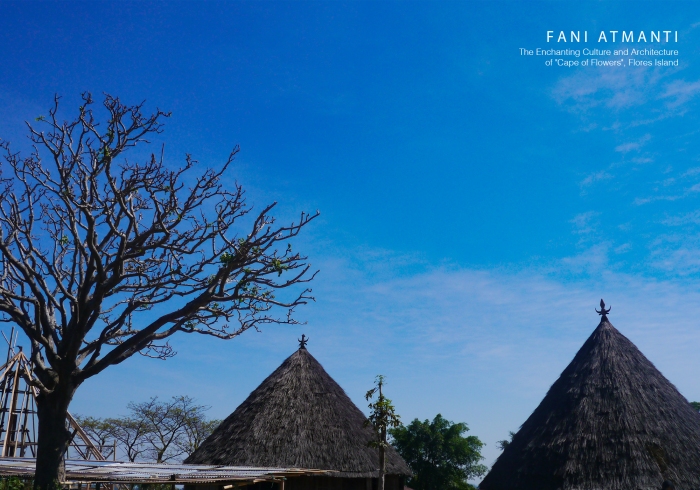 Ruteng Pu`u is located 4km from the Ruteng city centre. There are only 2 traditional houses left (the main house was rebuilt on 2000 and the other was rebuilt on 1989).

Pu`u means centre. This village has Waringin tree (Ficus Benjamina) or it is called as ruteng in the centre of the village.

There are two ethnics who live in this village, they are called ndosor and runtu. They also have Chief of village/Tuo Golo and he should lead the festival held at the village, making a decision of land division and solve internals problems.

I was quite surprise to see Bena village from the entrance. The scenery looks like a scene in a fairy tale. The village extends from its front side (north as the entrance) to the back side (south). It lies on the valley where ravines surround the area. The village consists of 45 houses built around the village courtyard with a different ground levels. 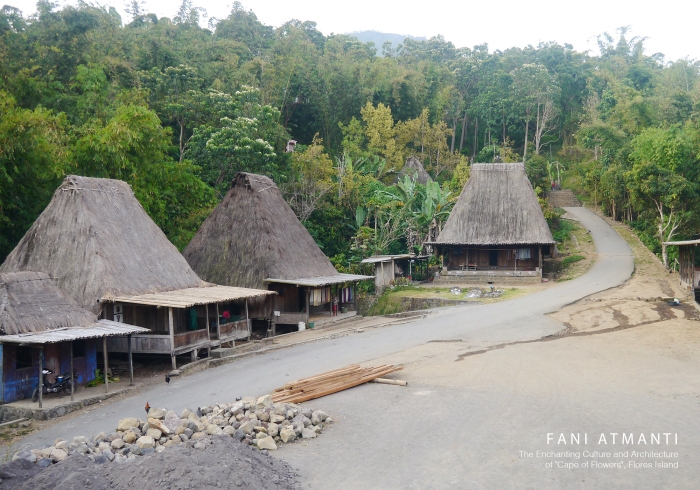 People in Bena Village belief that every house should have a couple to keep the balance of the spirit. Sao Saka Lobo represents man and Saka Pu`u represents women. 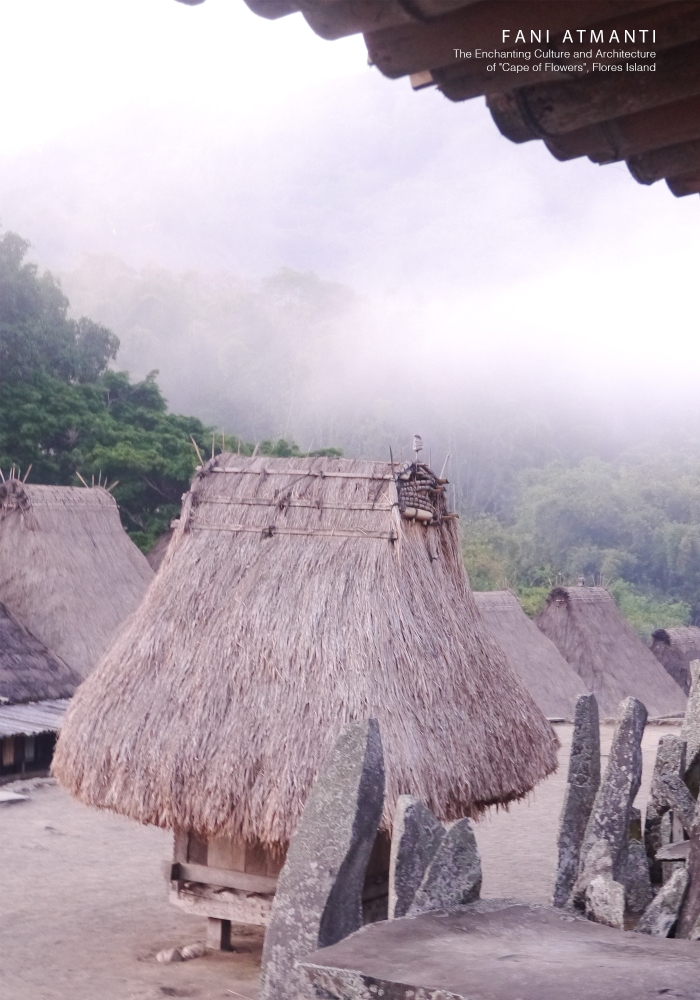 The characteristic of the village :

Bhaga : the square shape resembles a miniature of a traditional house embodying female ancestor of a clan.

Ngadhu : is an anthropomorphic umbrella embodying the male ancestor of a clan.

When I walk around the village, I realized that they have special roof decoration. The decoration was place at the centre top of the roof. The three of the decoration are :

Saka Pu`u : It is the main house of a clan. The ownership of the house is passed down to the eldest daughter. An ornament in the form of a miniature house is called Ana Yie which is placed on the roof of the house. The small house figure on the rooftop which represents women.

Saka Lobo : The ownership of this traditional house is passed down to the son of the female descendant. An ornament in the form of a male figure holding weapons, called Ata, is placed on the roof of the house. The human figure on the rooftop represents man.

Kaka : This traditional house is a supporting house for families and has no ornament on top of the roof. 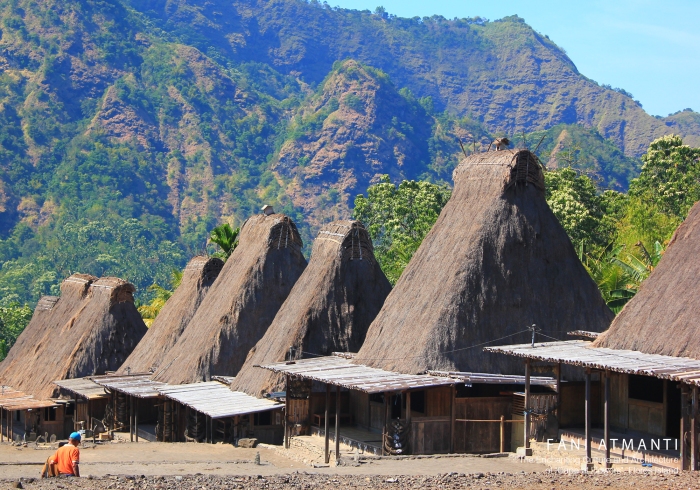 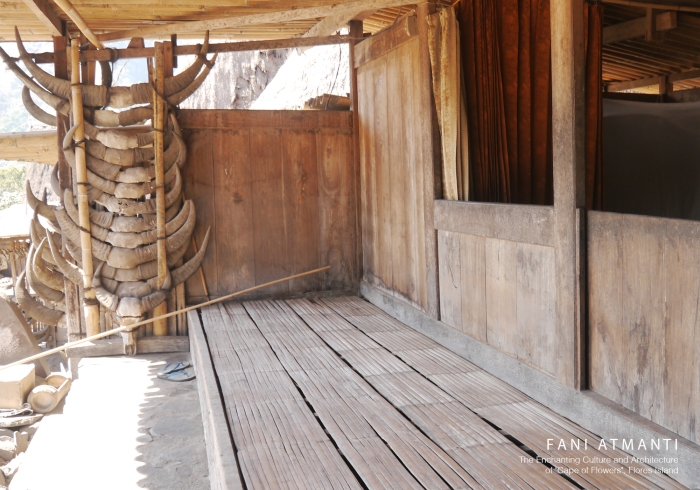 It`s my photo in Bela village wearing black jacket, tshirt, and trousers. hahaha. During the survey in a super hot area, it will be comfortable to wear tshirt and short only. But I am afraid that I got bite by dangerous mosquitos since it is located in the forest, so I decide to wear jacket 😀

Gurusina village is located near Bena and Bela village. There are 33 families with 33 houses. The traditional houses are situated around a wide courtyard that displays several altars and sacred small buildings called ngadhu and bhaga in the centre. 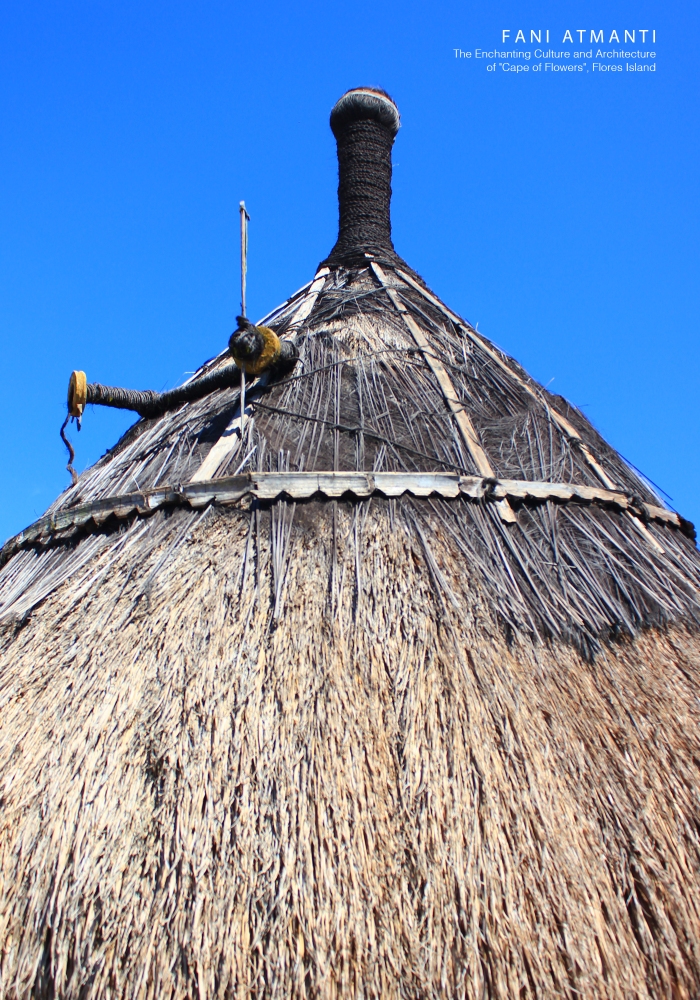 In the courtyard, near ngadhu and bhaga , there are several graves/ stone altars.

The door at the Gurusina village designed with low height to let the people bowing when entering the house, as a symbol of respect and humility. 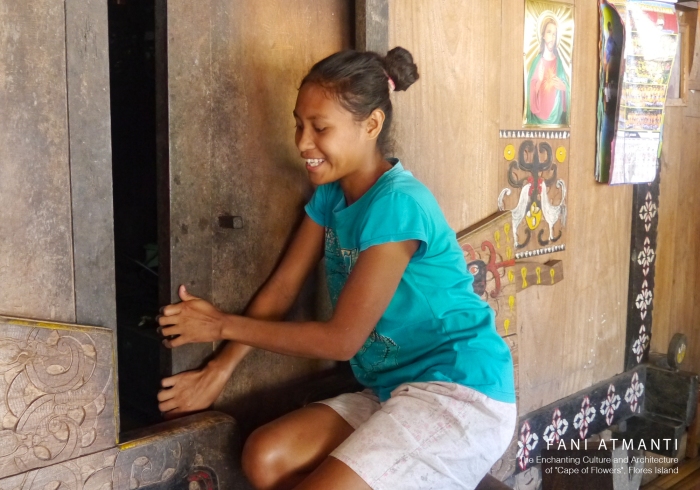 Tutuphada village is located in Ngada, Bajawa. The village has an entrance, a small entrance from the wood, brach and plants. The gate is really simple but feels like a sacred gate. The villagers said that the gate is important for a specific ritual for building a new house. The material for the new house should ho through this gate to enter the village. 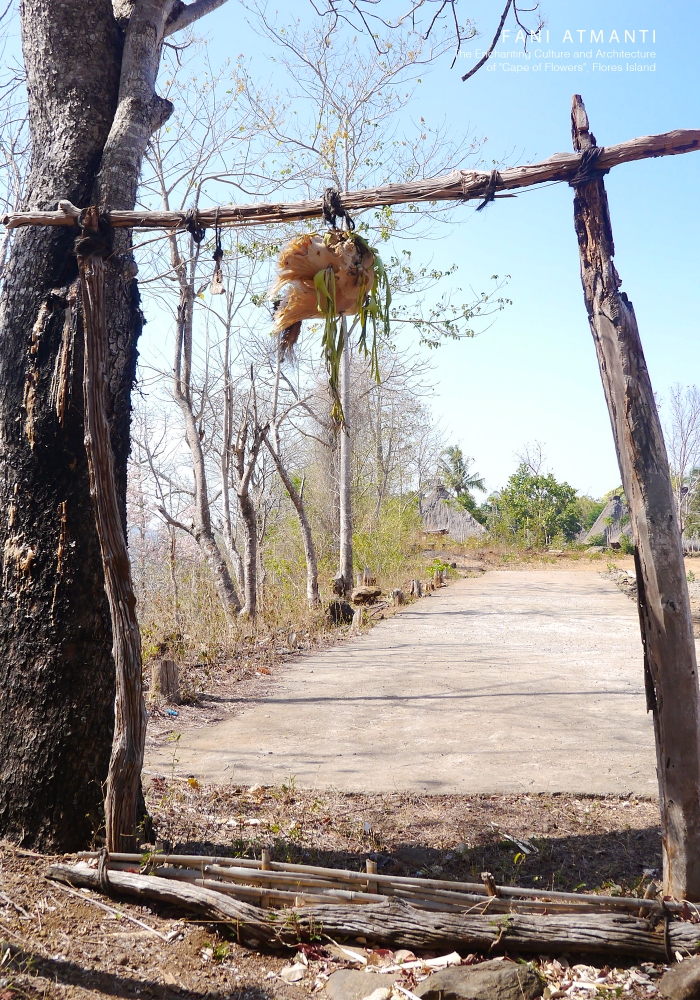 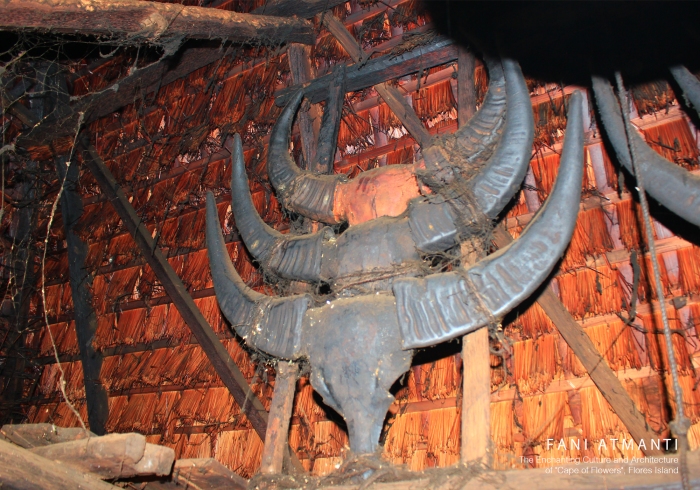 I arrived at the village at 12 in the afternoon. It was super hot outside and dry but it feels cool at the veranda and inside the house.

Right now there are 13 houses which is differentiate by the “horn” on the top of the roof. The traditional house here are also situated around a wide courtyard that displays several stone altars in the centre.

The traditional house use wood material for the structure and thatched roof. The exterior of the building has three small sculpture that symbolize father, mother and child. The centre interior of the traditional house is decorated with buffalo skulls. This are the skulls which was eaten by the workers who was in charge of building the house. The number of the skulls shows the price of the house.

The road trip from Tutuphada to Ende was amazing. Too many beautiful view so I took so many pictures along the way. This sunset was taken during the way to Ende area and it was the best one! 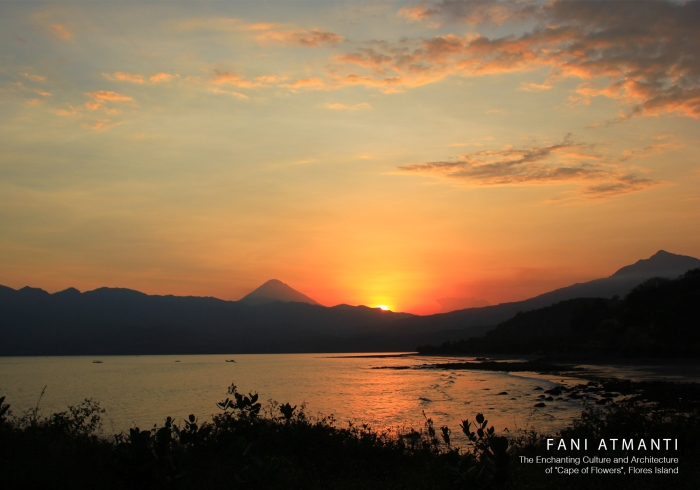 Wolotopo village which is located at Ende, is a large and lively village built into a quite steep hillside. There are only two traditional houses that remains here, it is called Sao. The other houses in this village use metal and concrete. 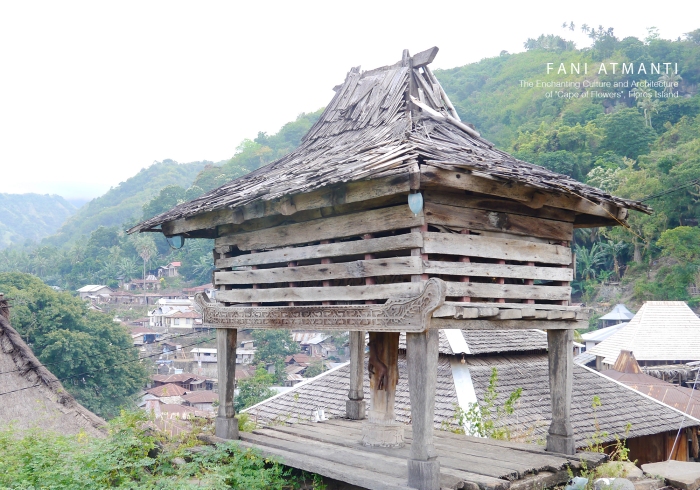 In Wolotopo village, there are no north and south. They only know west (Lela Molu) and East (Mata Leja).

In term of the architectural space, they have specific name for it. 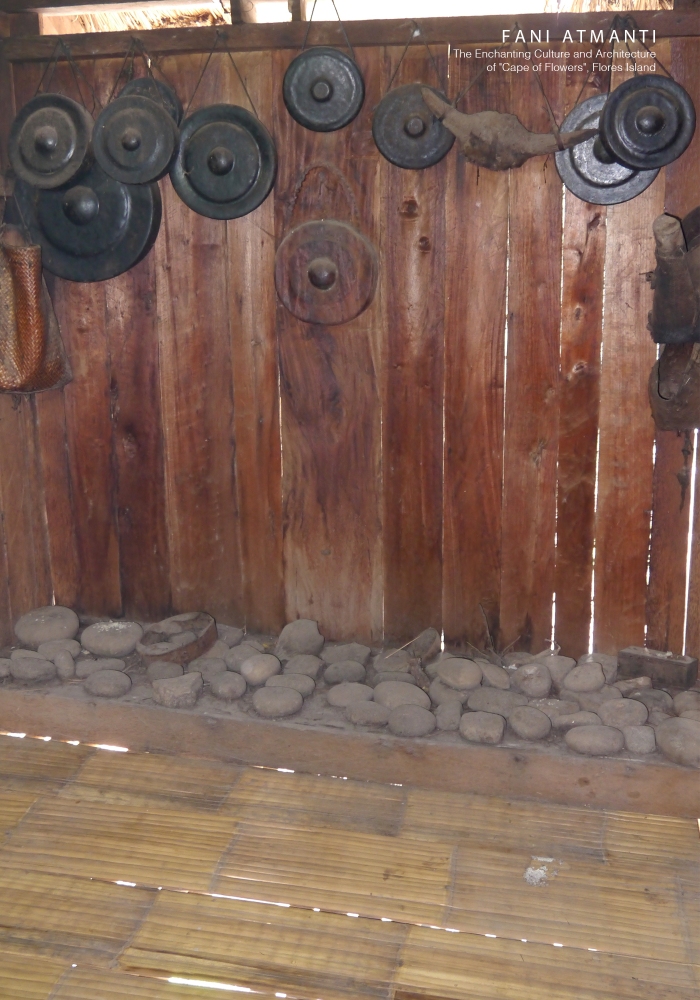 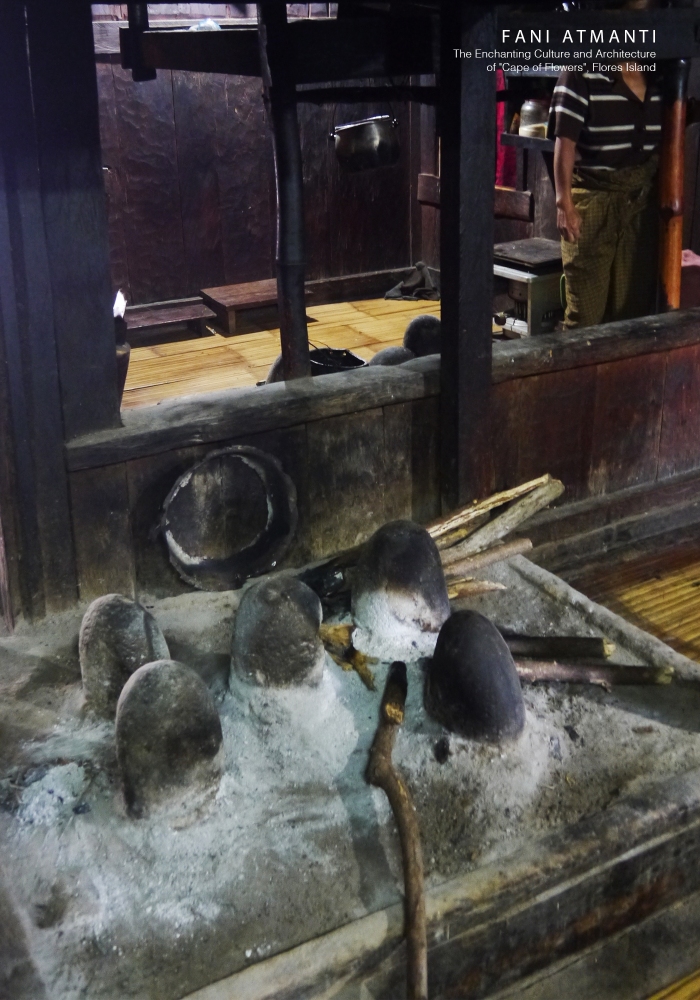 Benga a wood plate for stepping

I visited one house which is inhabited by 6 families that include Mosalaki (the head of the clan). The above pictures was from one of the Sao. 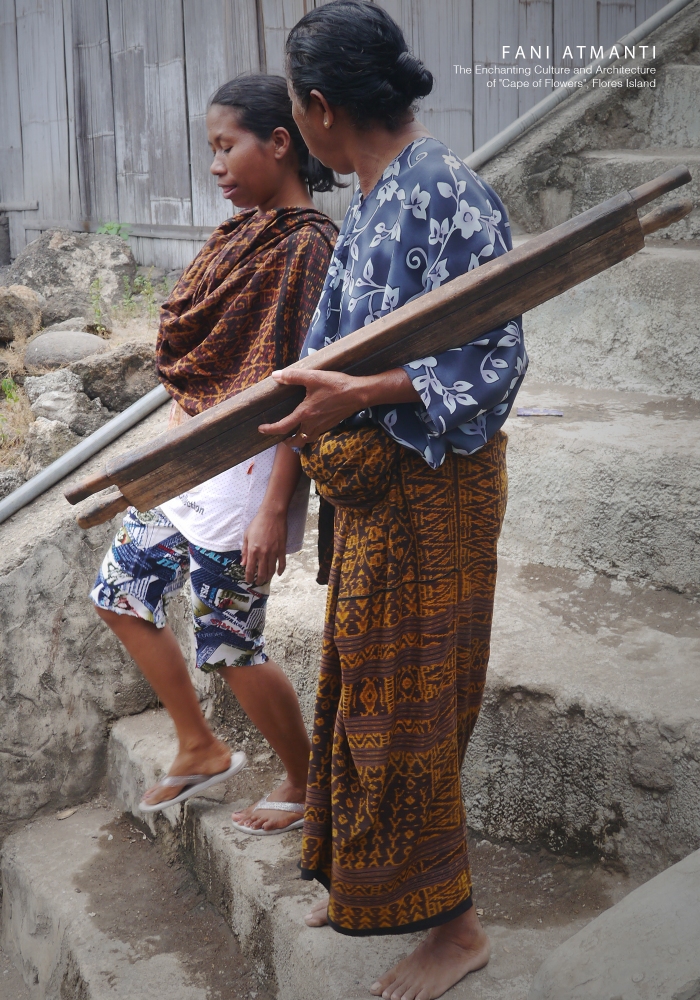 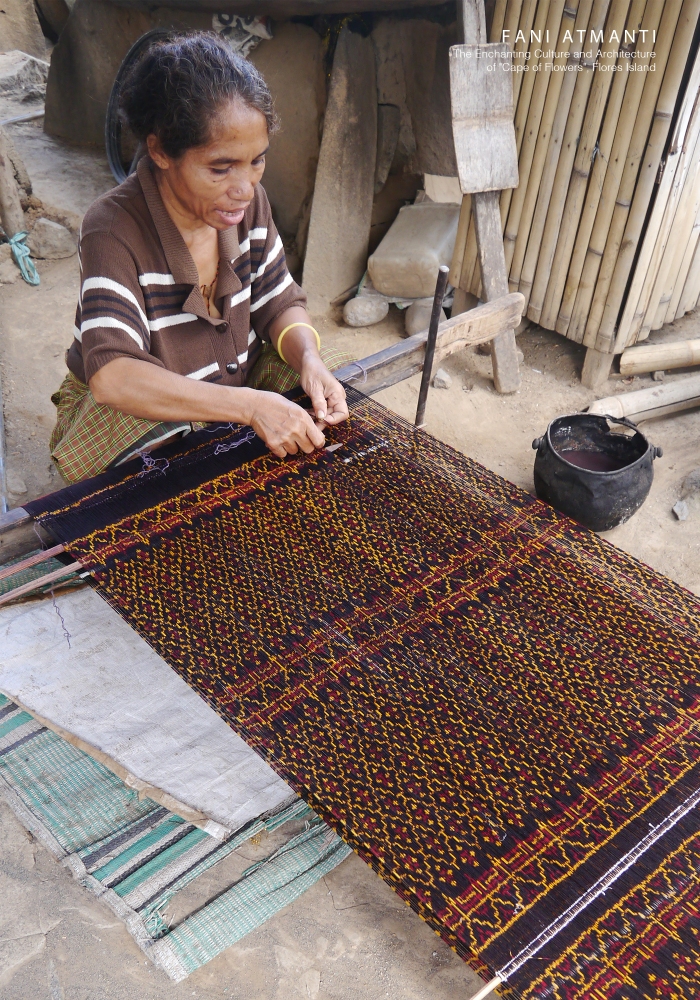 Saga village is located in the same area with Wolotopo village, in Ende district. 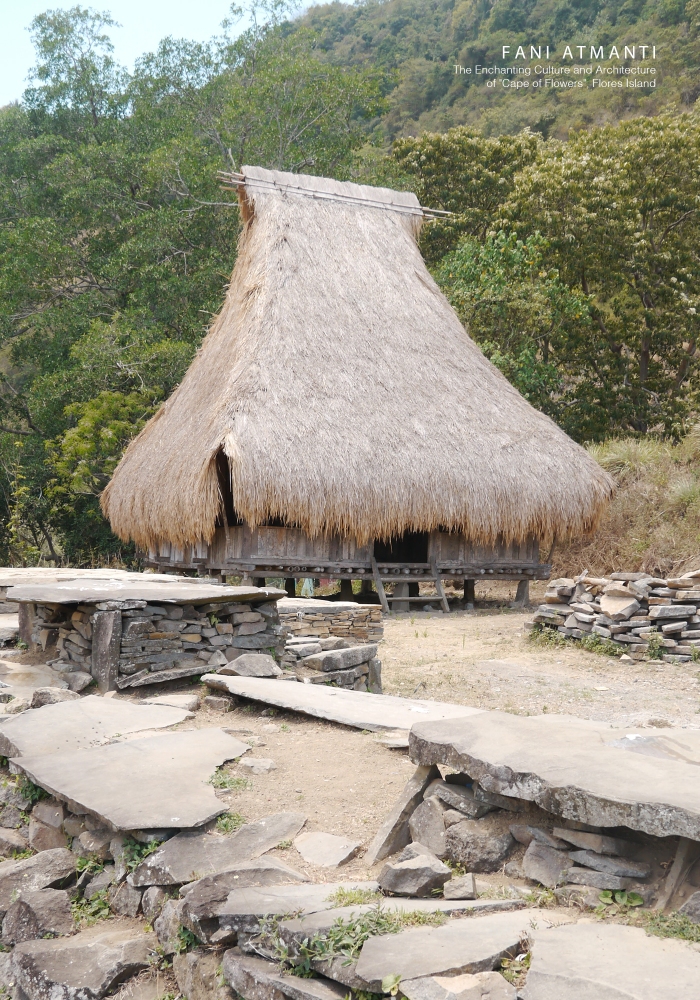 There are 13 traditional houses that remains here, but only 2 houses that inhabited now. Because of the earthquake in 1992, the Saga people start to live in different area and only come to village every traditional ceremony. On 1998 the houses was rebuilt but only 2 families came back to the village.

In the ancient time, their religion was called Agama Iwa (animism), but starting from 1920 they became a catholic. I found many coffee were dried on the stone altar around the village. The Saga village produce luwak coffee and distributed to the big cities or sometime sold to the visitor who visit the village. 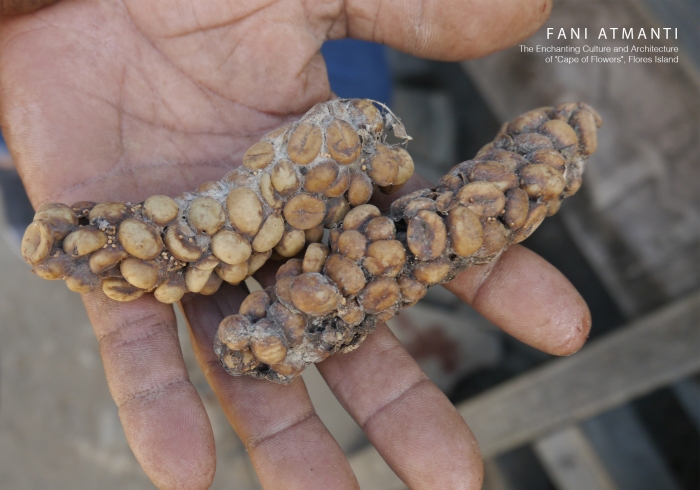 Wologai village is one of the village in Ende district. 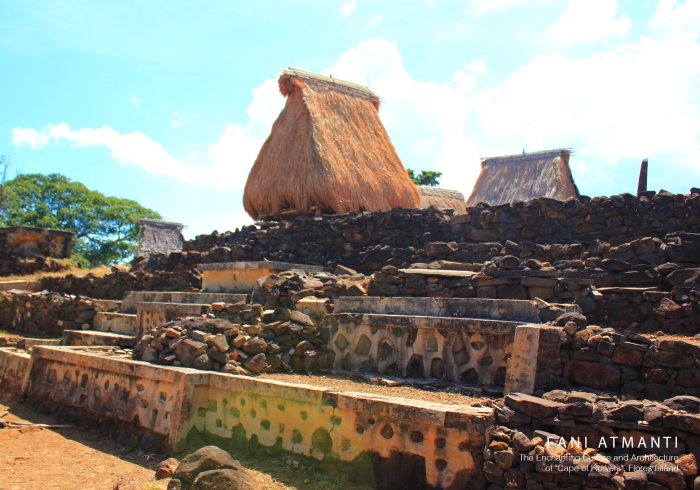 The wooden architecture house of the village is decorated with ornaments such as plants and animals. There are also some ornaments which symbolize fertility.

Wolokoli village is one of the village in Ende district.

A little bit different with the other villages in Ende district, in Wolokoli village there are 2 religions, Islam and Catholic. Those indigenous people are from the same Clan (Empu Sawu Clan). But most of the villagers are a Catholic (only 12 families are Muslims).

Wolokoli village still sacrifice pig for their traditional ceremonies or rituals. So in that time, because the Muslims are forbidden to eat pork, the Catholic people will cook in different area. However, all of the villagers still held the ritual together.

Koanara is located at Moni, East Nusa Tenggara. The people who lives in Koanara village is ndito ethnic.

The Interior of traditional house has strong relation to the tradition such as praying and making an offer for spirit. There is one unique stones inside the house called kena. Kena is a group of stones place inside the house. Located in the both side of inner room (across the kitchen). 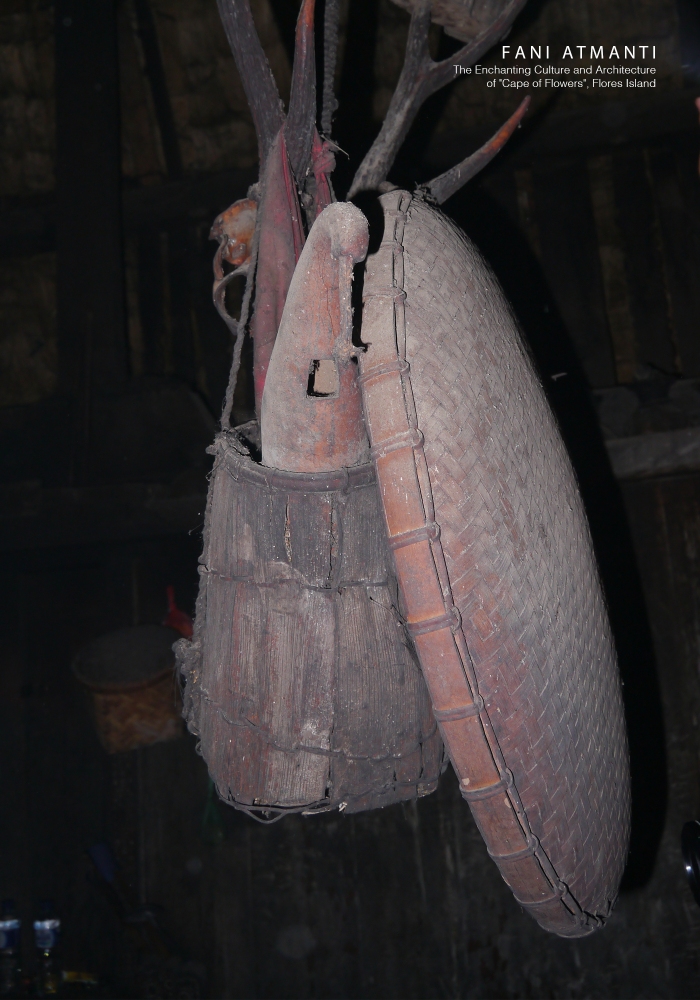 Here are some photos of the architecture in Koanara and Jopu Village.

And last, I want to share sunset picture in Kelimutu Lake and Maumere. The sunset in every city was different  from the sunset in my hometown, Yogya. It is too beautiful, the scenery is more beautiful than the picture I took. 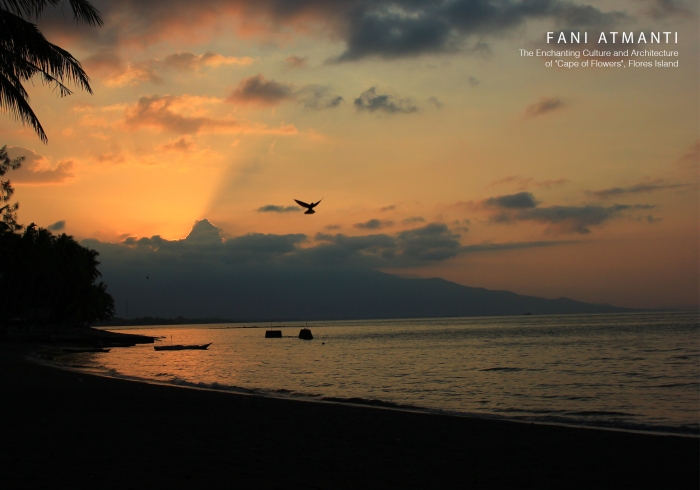 Thank you for visiting this article. Hope you like the photos and story.