Hello, I am back with my little story from Kraków. I am thankful that I got a chance to attend the 41st Session of World Heritage Committee in the super cool city called Kraków. When I was in undergraduate school, my fave advisor Mr.Imam D asked me to study some of the museums in Krakow for my thematic studio and now I had a chance to be in there. I feel so thankful to have this experience.

I arrived on July 2nd in Chopin Warsaw Airport and directly go to Kraków city to attend the opening ceremony of 41st Session of World Heritage Committee in Wawel Castle. I was super tired from the 16 hours flight but it’s fine because I was impressed by the city and the Wawel castle. 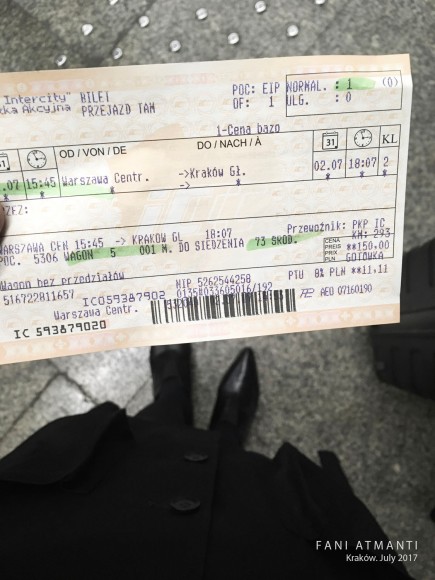 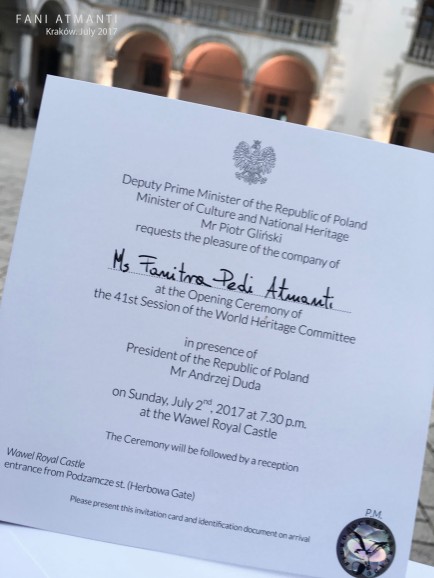 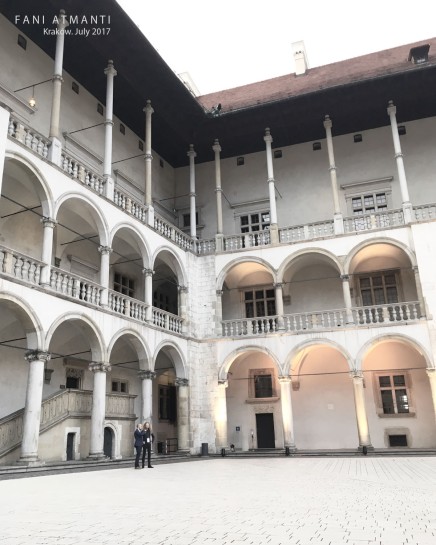 Well, Kraków is located in central Europe and it was the Poland former capital. The city centre became world heritage site on 1978 and it includes : the Wawel Hill complex, the medieval chartered City of Kraków, and the town of Kazimierz (including the suburb of Stradom). The city has the largest Polish heritage complex, including 6000 objects of world heritage, 3 million of movable heritage : sculpture, painting, and work of art from the local artisan. The topography of the property and the relationship between the River Vistula and Wawel Hill complex, remain legible. The city’s panorama also remains intact. 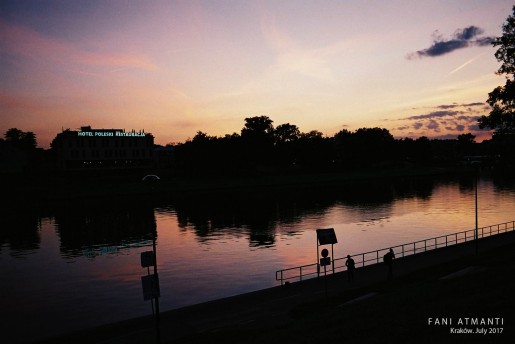 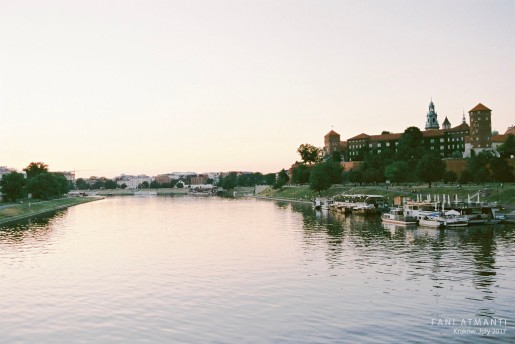 Kraków possesses many characteristics, such as its tragic history, its incredibly hospitable people, and its rich urban design. These characteristics provide Kraków with an incredibly strong identity, and help shape it into a city that is unlike its neighbors throughout the rest of Europe.

Krakow urban center suffered from warfare on 1914-1918 and 1939-1945. While on 1939-1945, Kraków becomes the general gouvernement, which covers most of the central Poland’s prewar territory. The Nazi general governor ruled the territory from Wawel Castle.

Moreover, the multiple styles and cultures evident in Kraków, Kazimierz, and Pódgorze demonstrate the diversity of influences which had an impact on Kraków’s development as an urban complex, and which reflect the roles played in this process by different nations. 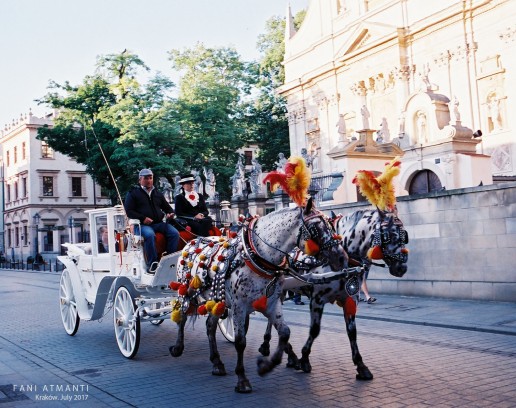 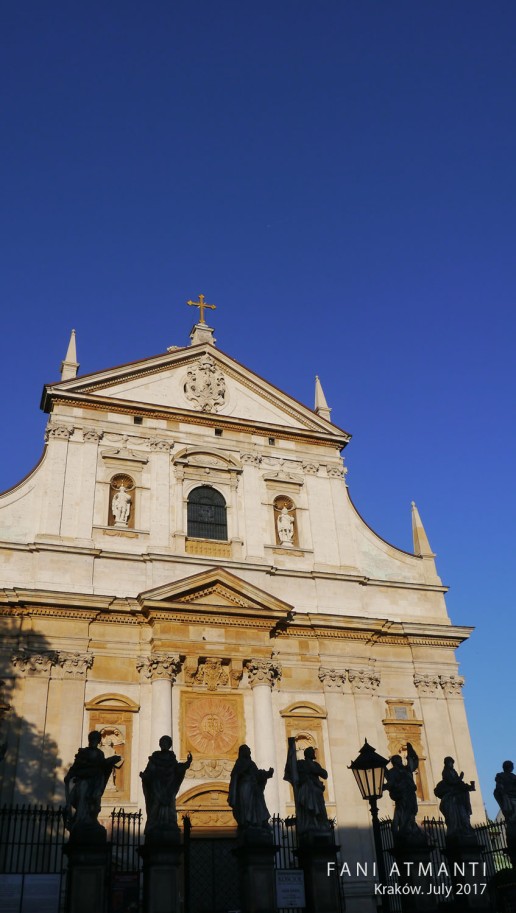 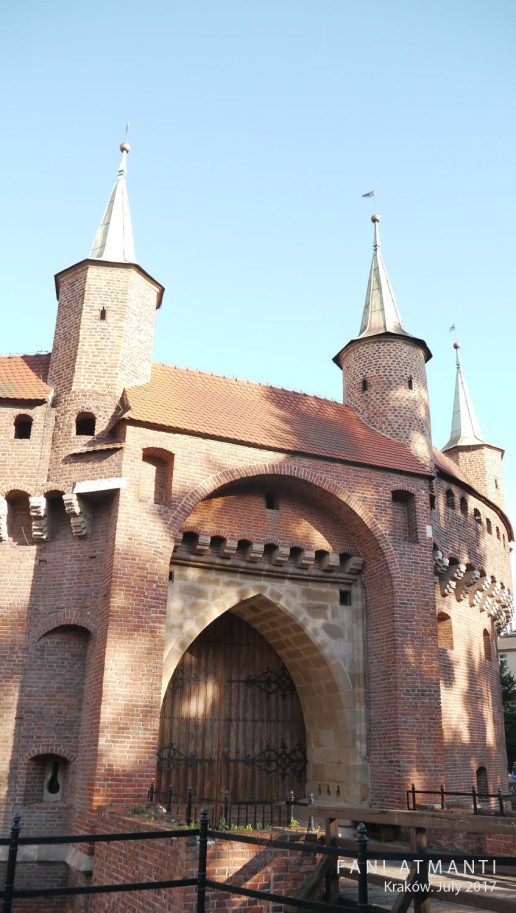 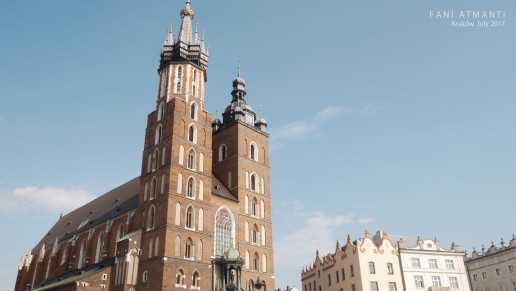 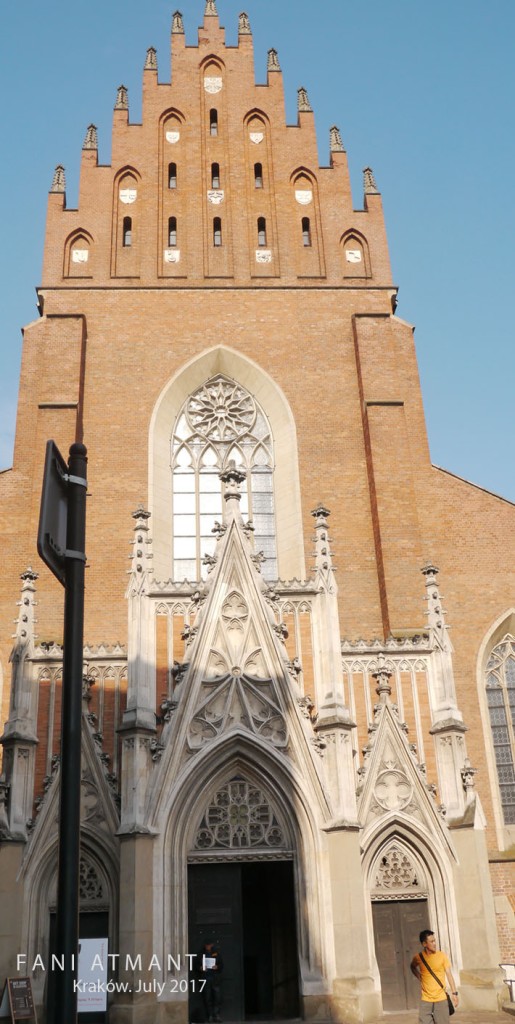 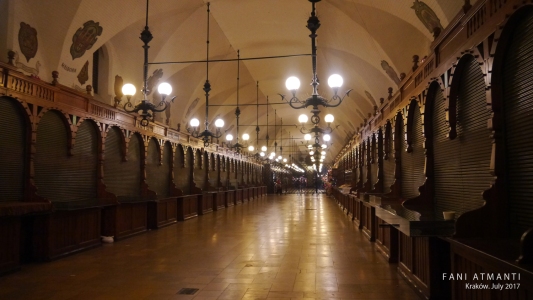 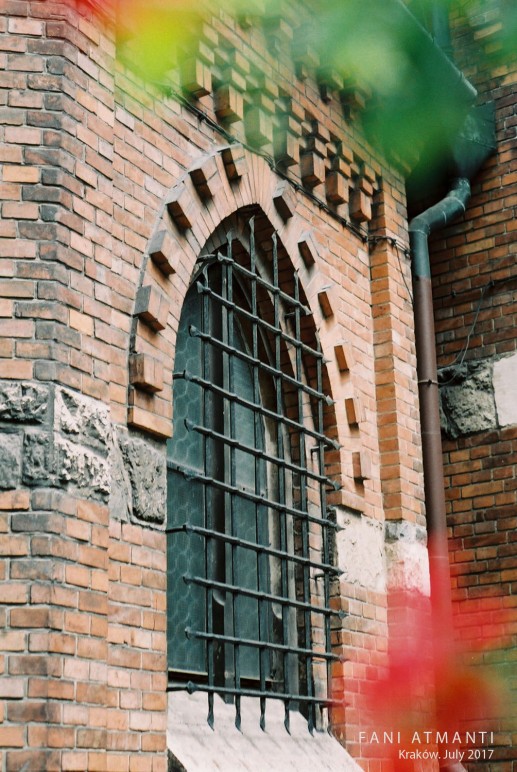 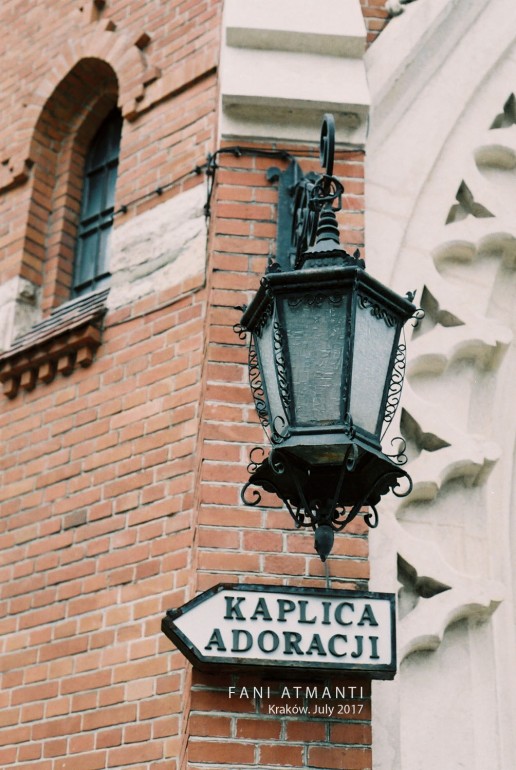 When you walk around the city, you will recognize the complex architectural character such as Gothic, Renaissance, Baroque and also post-modern buildings which are built in the buffer zone of World Heritage Site. Krakow Barbican Gate has gothic style with its cylindrical brick structure, City Hall Tower was built of stone and brick with gothic style, St.Mary Basilica also with Polish Gothic architecture, St. Peter and Paul Church with Baroque architecture, St.Joseph Church in Podgórze with Vistula Gothic architecture style, and two post-modern buildings in the buffer zone of world heritage site : Małopolska Garden of Arts & CRICOTEKA Museum of Tadeusz Kantor. 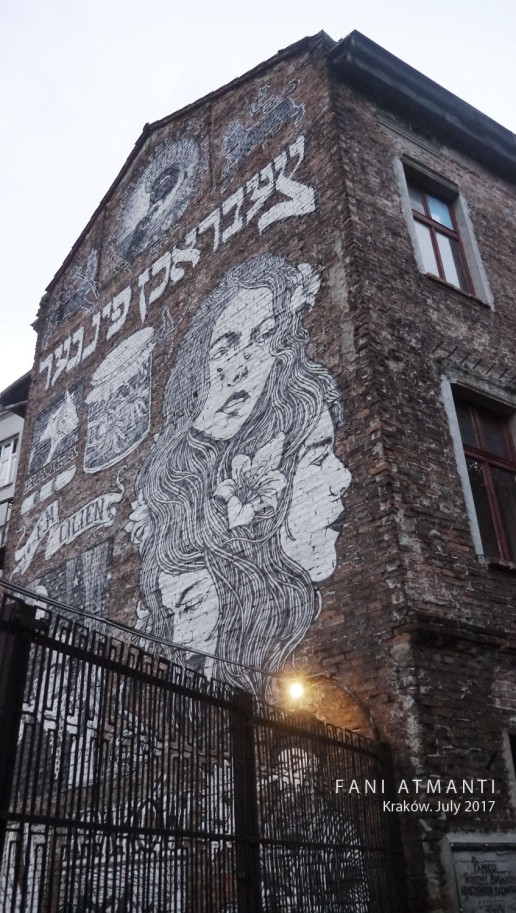 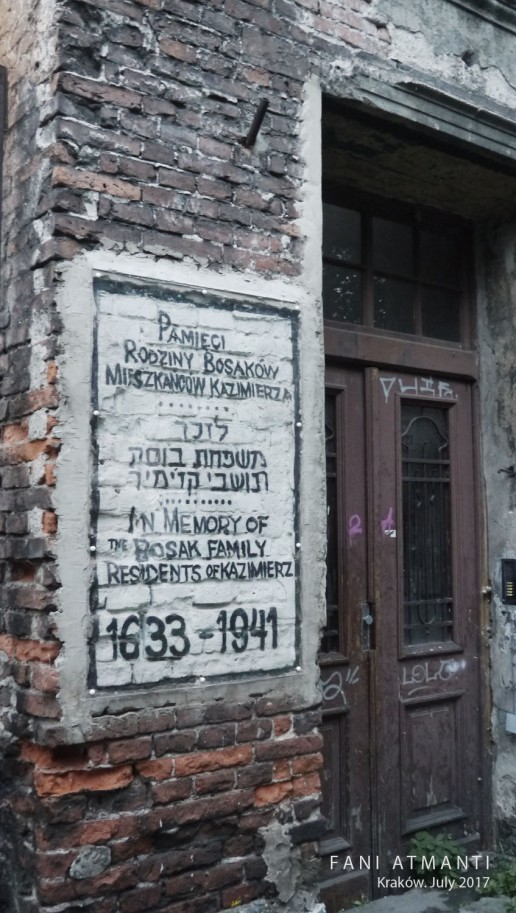 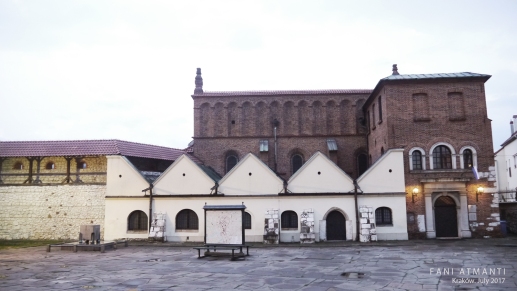 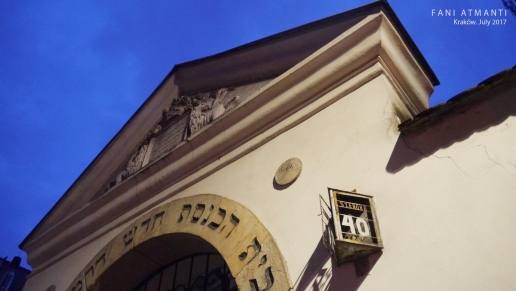 Old Town Square has the feeling of the medieval building in Europe, while the Kazimierz which was a Jewish District has a unique characteristic which enriches the city of Kraków. Right now the district has become a major tourist draw and the pilgrimage site for Jews. There you can find some old synagogues and also Jewish restaurant which serves authentic Jewish delicates. What I found interesting is the educations offered in this district. I entered some museum about Jewish culture and it’s a rare experience for me as Indonesian because I have never had a chance to enter synagogue before and visit a museum related to Jewish culture. At that time, I visited 6 old synagogues : Temple Synagogues, Kupa Synagogues, Remu Synagigues, Izaac Synagogues, and Wysoka Synagogues, and Stara Synagogue (which is now served as a museum). When I enter Kupa Synagogues, I saw some scenery illustrations painted on the wall and I just knew that it is actually the scenery of the holy land Jerusalem with a presentation of the Temple of Jerusalem implied through the Dome of The Rock. Then the other symbol called the Star of David (in Hebrew, Magen David, literally “Shield of David”) it is actually not a symbol of Jewish religion, but it’s only a sign that possesses ethnic connotations. 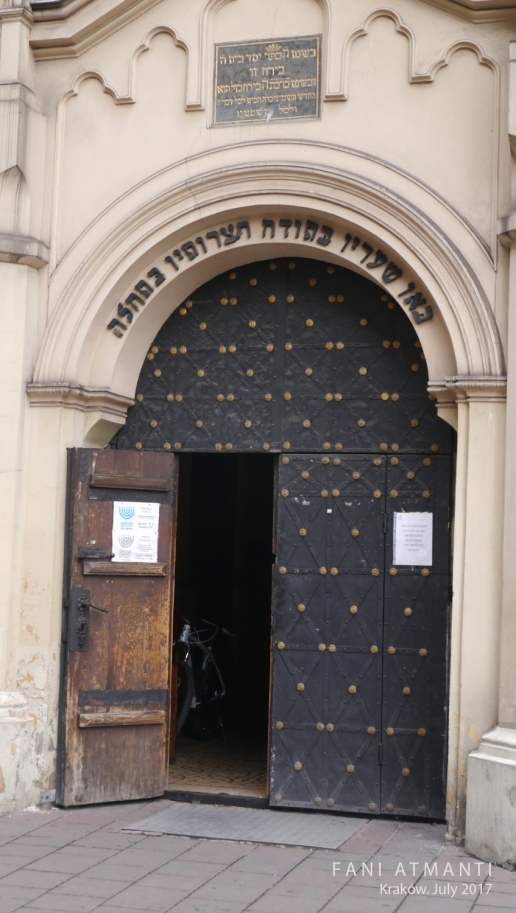 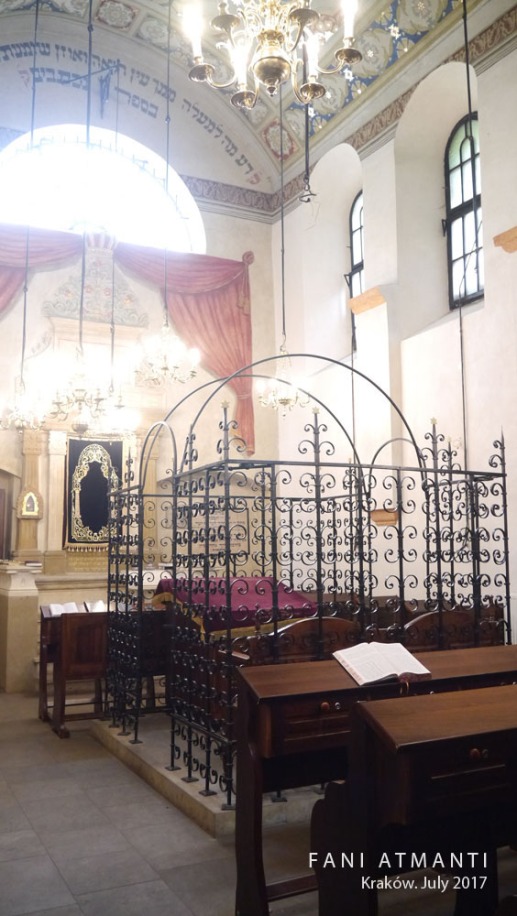 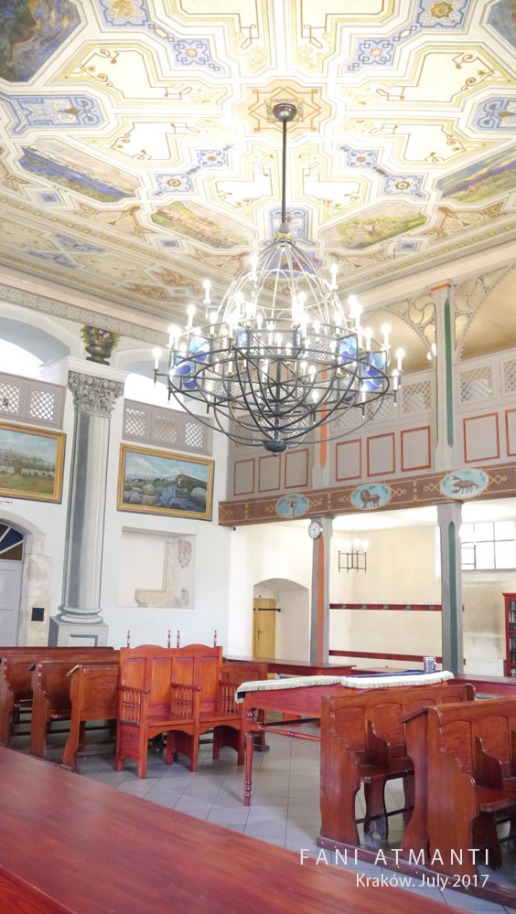 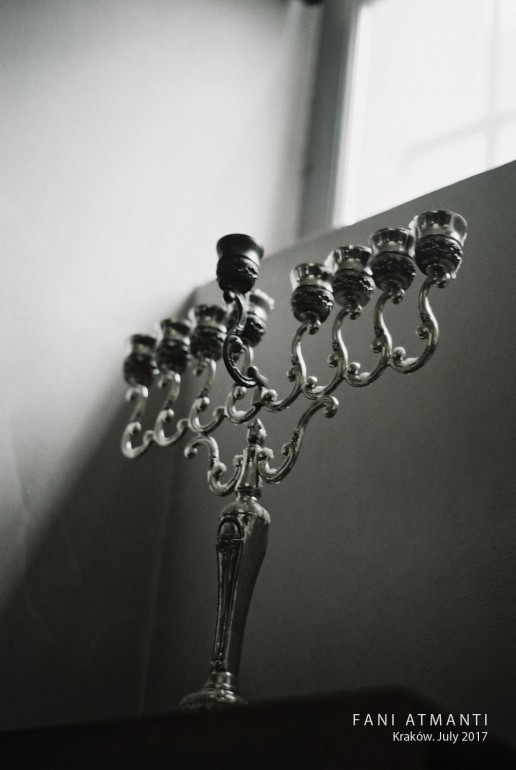 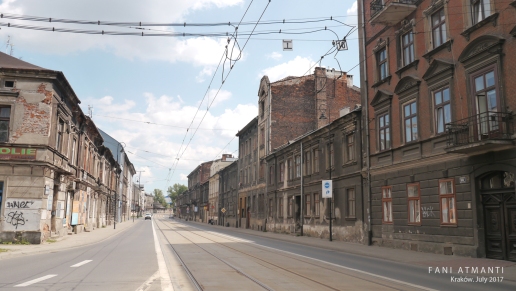 Then talking about Jewish dishes, it’s easy for me to find a suitable restaurant in that area because they have lots of menu for vegetarian. One of my fave restaurant is in Klezmer Hois, which serves traditional Jewish Galician dishes from 19th century. The restaurant also follows the kosher rules (Jewish Dietary Law). Check their website here : KLEZMER HOIS

The other element which impressed me is the post modern building which is located in the world heritage site’s buffer zone : Małopolska Garden of Arts & CRICOTEKA Museum of Tadeusz Kantor. 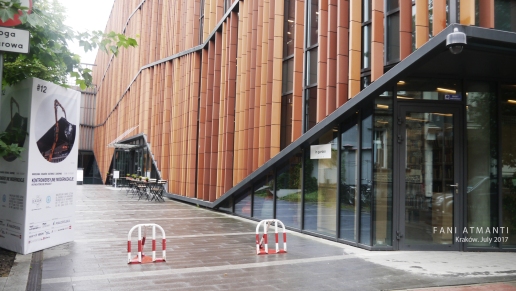 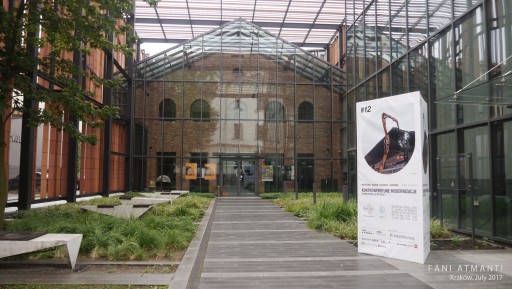 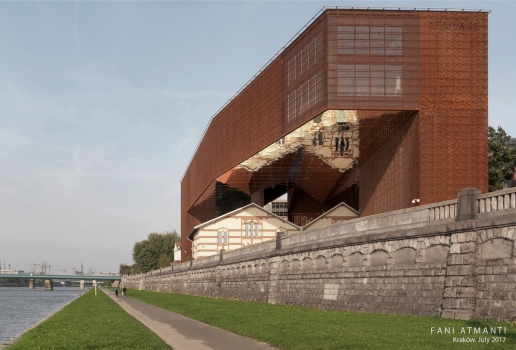 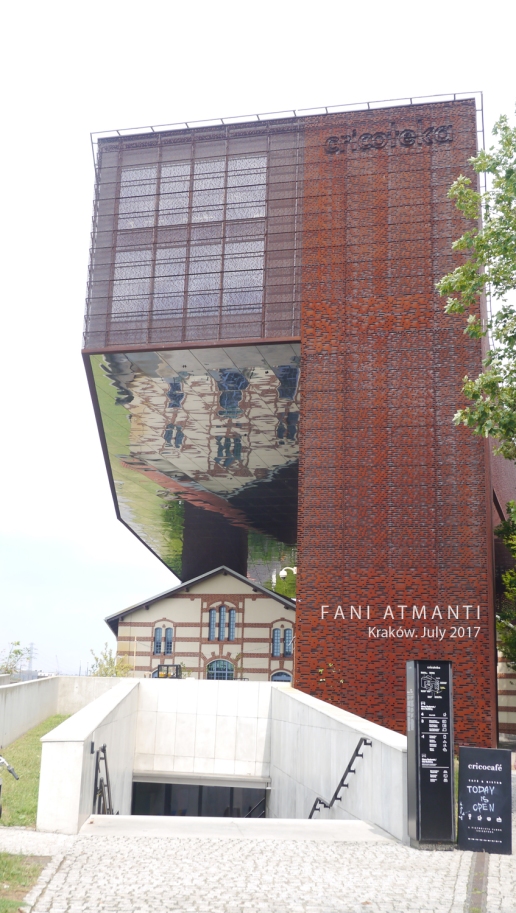 The Małopolska Garden of Arts is a theatre and library. The building has opening in the perforated roof of the garden, glass, steel and brick structure. The clay façade hang on the glass frame where it’s covering the old structure. For me personally the tone beige color blended well with the old environment even though the shape it quites contrast to the surrounding. The contrast might be a modern day interventions and it represents a continuation of the historical process. When I visit this building, the GAGA (Gallery of Architecture of Garden Arts) has an exhibition about :

Controversial Modernization : the risk that has paid off?

The exhibition tells about opinions from local architects that buildings or urban infrastructure relevant to the times in which they were created later changed their destiny and form. The task of the architects, and then also the planners, was to redefine them once and for all, the task of critics in public discussion around often comes to a result in controversial decisions. Conversations about changes in urban space are not easy. They have complex architectural, planning, social and economic issues that you can’t be solved with a simple solution.

Talking about : “The Risk That Has Paid Off” doesn’t want to discuss about how is the cost effectiveness of the modernization but want to discuss about “ Have they paid off the investors, answered the needs of users, increased the quality and aesthetic qualities of the space, and how did they relate to the existing architectural substance and its immediate surroundings?

By only visiting one city in Poland, I could learn a lot about Kraków’s history, urban fabric, and architecture. Thank you Kraków for the great experience and I wish to have second chance to visit again.

Here’s my picture with Hasegawa san and the Klown Konzept in front of Jama Michalika in Floriańska Street (one of the oldest café in Kraków). It was photographed by Jef Rabillon. Check out their website : JEF RABILLON 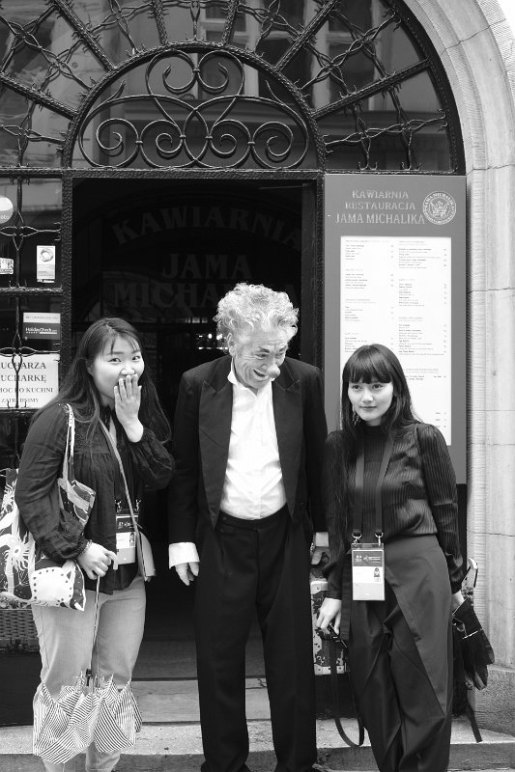