I remember back to university life in Jogja, we were introduced to Frank Lloyd Wright in “Landscape Design Theory” class. The first picture which was shown was Falling Water building. We learned that Frank Lloyd Wright has close relation to nature and the nature influences his works. I think I also did sketch of his Falling Water building for my personal practice to prepare a sketch class called TKAD/Teknik Komunikasi Arsitektur Dasar.

Last few months, I once read a book about Japan’s important cultural assets and I found FLW building in Ikebukuro area, Tokyo. The book explains about some projects of Frank Lloyd W in Japan and I just knew that he actually has special experience with Japan. It is said that Frank Lloyd W think that Japanese conceptual building design were not seen as frozen in a specific time. It is improving and would be seen in a state of transformation. This kind of concept is a contrary with western architecture which he found the huge different is impressive. Wright loves natural, human scale , local materials (warm earth tones and wood), and integration of interior and exterior, which fit with Japanese tradition. American architect inspired by Japanese architecture and then later he found one unique stone called Oya stone which has distinctive feature. He is the first architect who use Oya stone as real construction material in Japan. Later, one Japanese architect also interested to use Oya stone for building material such as Kengo Kuma. What’s the special feature in Oya stone which makes Frank Lloyd W choose it instead of other stone? He mentioned the reason in some interviews and documentary.

He use Oya stone in Jiyu Gakuen Girl’s School, one of his buildings in Ikebukuro area which I visited last week.

I think it will be a good chance for me to visit Frank Llyod’s building and experience his space in real life. So last week I decided to visit his building in Ikebukuro called Jiyu Gakuen “Myonichikan” girl’s School. It’s located in urban area but the environment is quite calm. The building style has different style with the environment but it blends really well. The building use soft color for the exterior, long horizontal lines, low ceilings, solid construction, hipped roof, and high-vaulted windows which is called prairie style.

When we visit the building, we got a flyer which has brief explanation about the building and they have some Frank Lloyd W books inside the building. Guest can freely read the books while experience Frank’s space. Frank Lloyd W lived in Japan between 1917-1922 for the construction of The Imperial Hotel. He got huge projects but why he want to be part of this tiny project? 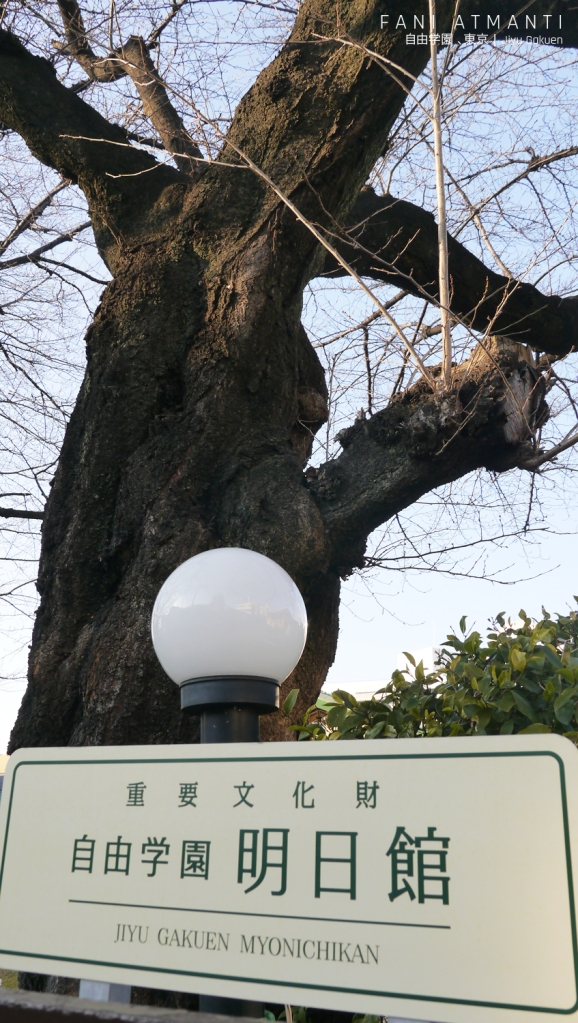 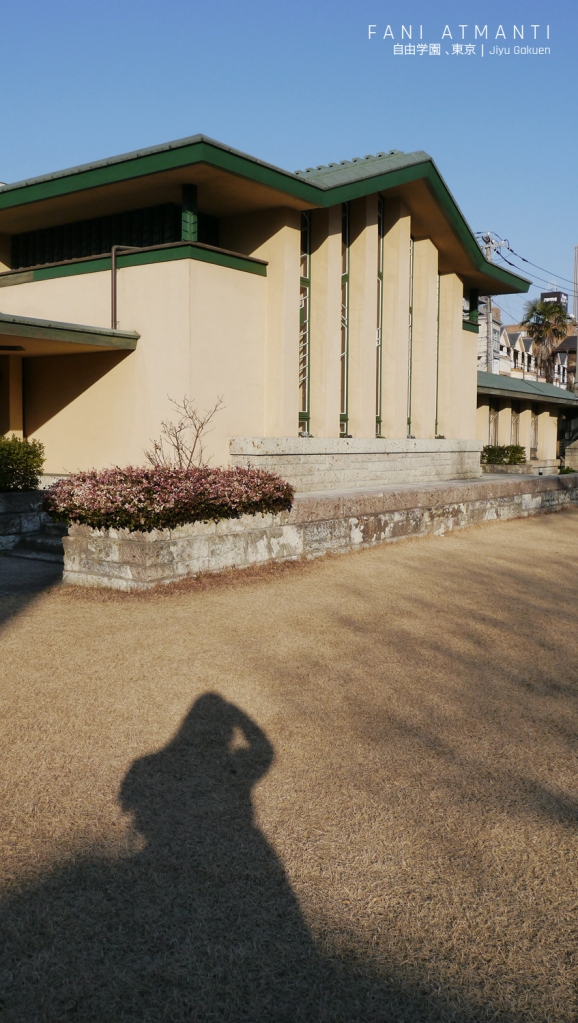 The philosophy underpinning Jiyu Gakuen Girl’s school shared many points in common with the Hillside Home School (1902) run by Wright’ s aunt, including the emphasis of life experience. Wright develop strong bond of trust with the founders. So Jiyu Gakuen was established by Japan’s first woman journalist at the Hochi newspaper, Motoko Hani. She and her husband who also a journalist embodied optimistic, liberal spirit of Japan in the early decades of the twentieth century. The Hanis want to establish a school with more liberal educational program that would prepare them to become self-reliant members of the society. It is said that The Hanis believe that the aim of education is to create truly free people. Then the founders think “Freedom School/ Jiyu Gakuen “The House of Tomorrow”/ 自由学園明日館 as the school name. The building was completed the construction on 1992.

This building survived from the Great Kanto Earthquake and the devastating fire bombing in Tokyo during World War II. By the early 1990’s a Japanese group interested in the restoration of this building and finally become Important Cultural Property in May 1997 after complicated governmental procedure. 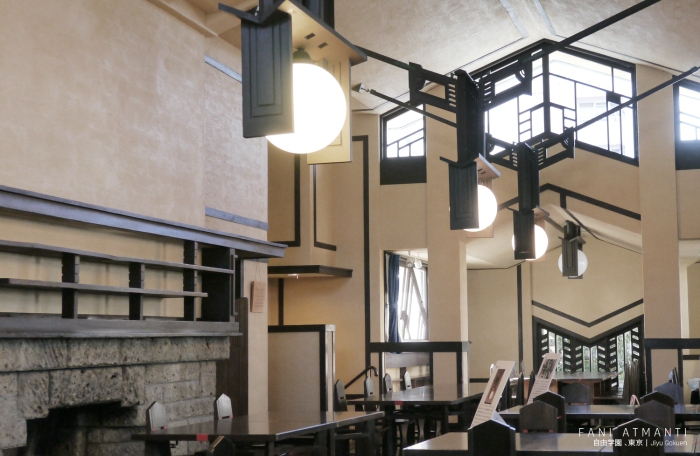 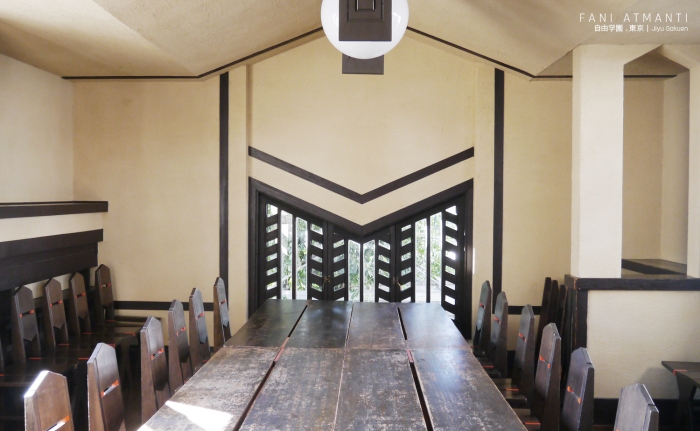 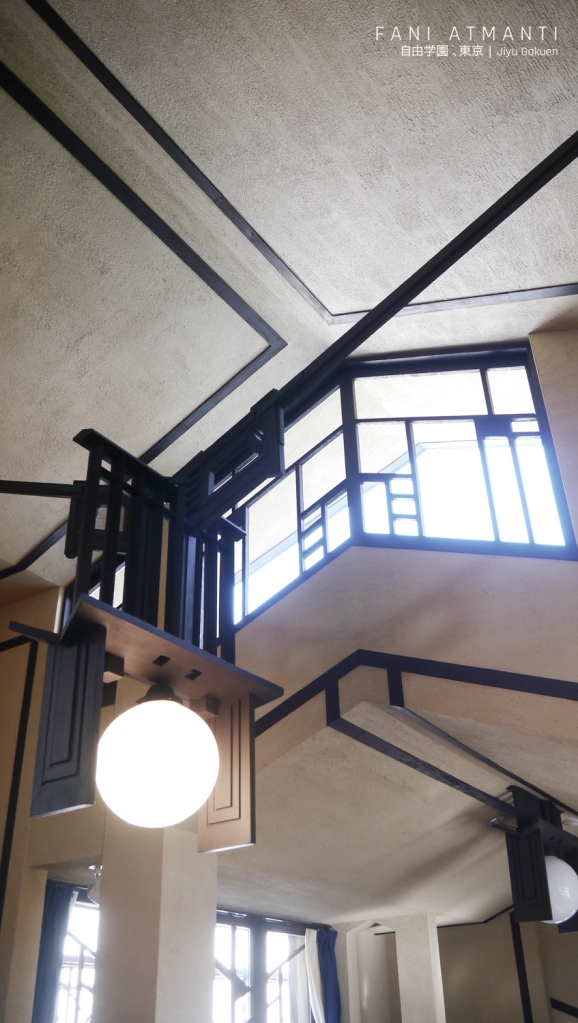 One important consideration for Jiyu Gakuen in terms of the preservation process, they use a concept called “dotaihozon/胴体保存”means a dynamic preservation. It is allowed to use the building for any purpose desired and accept visitors. This concept also allow improvement to provide practical use of the cultural assets.

There are many standards to care of cultural property in Japan such as :

In Jiyu Gakuen case, they use the third standard (半解体修理). All the main structural were dismantling except the framework. Only those materials that were damaged irreparably were replaced and replaced with the same materials as the original one. The methods of original construction were also retained. For the oya stone, since it is fragile and often eroded by weather and humidity, 2 chemicals type were added into the stone.

The interior use oya stone for corridor’s 1st floor. Frank Llyod W choose oya stone for its uneven surface, warm brown colors, softness which always matched well with his building’s design. The tuff-rock oya stone was formed by volcanic activity over 200,000 years ago and it often contain bits of seashells and wood. 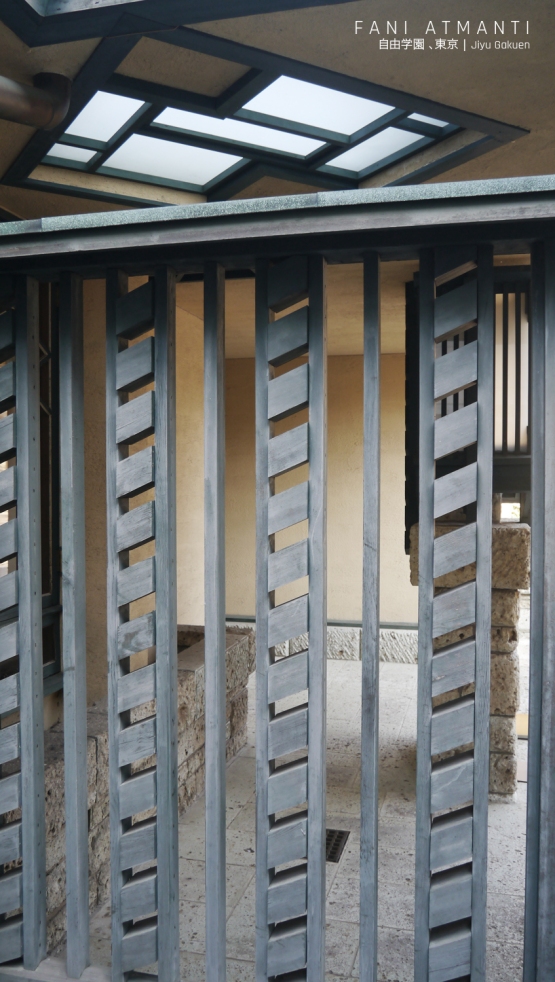 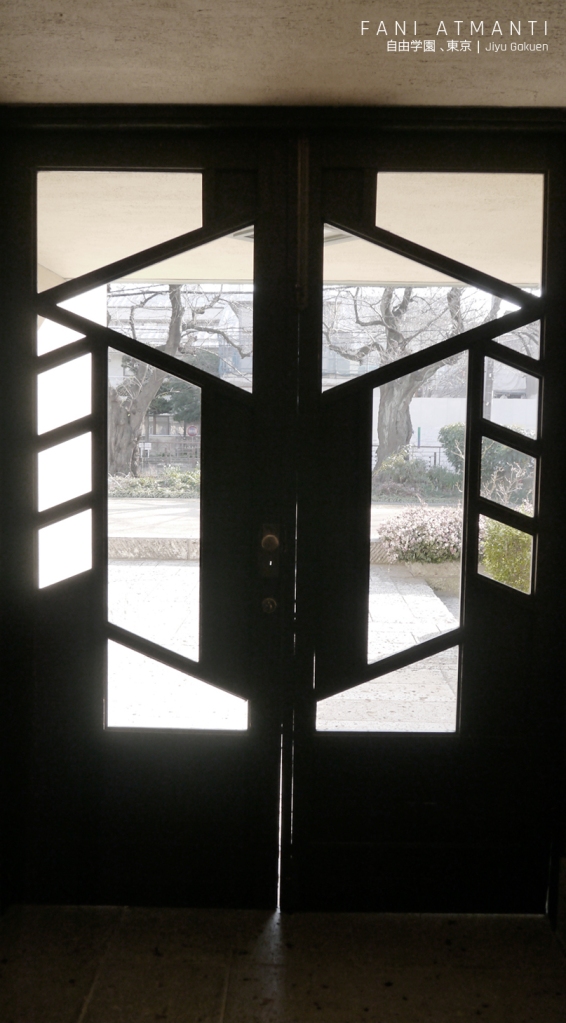 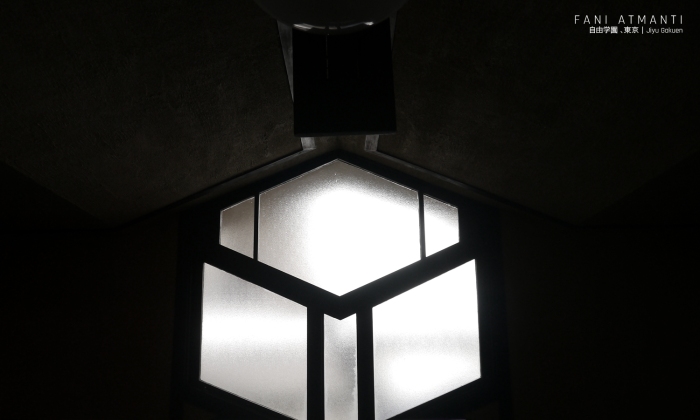 The interior has an impressive interior because the ventilation are covered by distinctive Wright’s frame which casting dramatic lighting, the pendant lighting in dining room are blended really well with the custom made furniture. The geometric detail on all over places are combined together and create a deep beauty of Wright’s space. 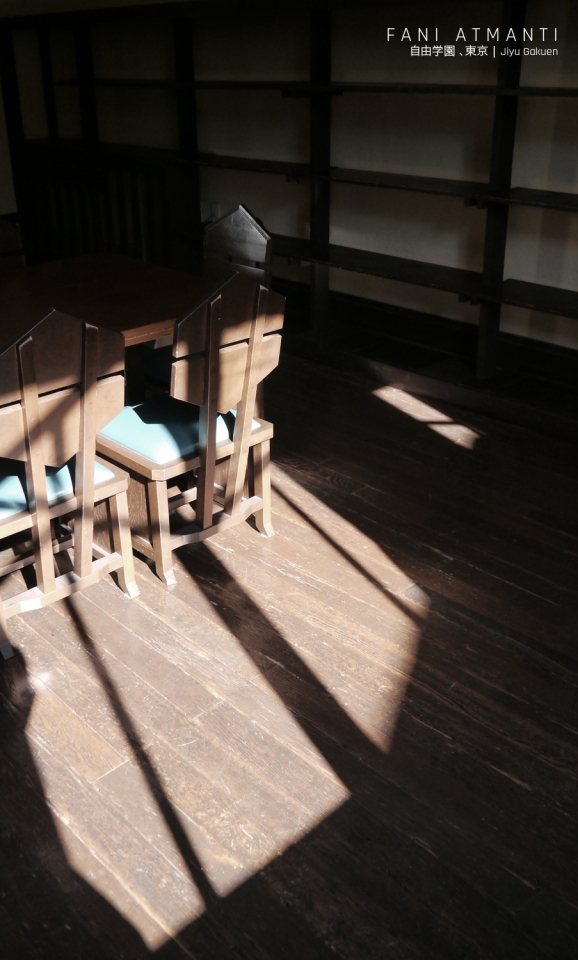 In the previous magazine I’ve mentioned before, they discuss about shibui 渋い which influence Frank Lloyd Wright. Shibui is subtle, unobtrusive sense of beauty or can be said as the highest level of beauty in Japan. It’s a type of aesthetic and beauty which doesn’t need announcement, the quality speak for itself. Some articles also explain that shibui is kind of rare beauty, elegance and sophisticated. Frank Lloyd W inspired by this concept and apply this thinking for design making process.

It’s difficult to explain about the ambience of Jiyu Gakuen’s space because the real experience is much more different. It’s unique and mysterious.

All photos were photographed by me using Lumix GX.

Btw, they also provide good coffee and biscuits for visitors! and one pic of me 😀